So when last we spoke, I was surrounded by 10 poems all of which descended in similar ways to the same simple place. I call them my WE ALL GONNA DIE poems, because that’s pretty much what they all say. Ho hum.

And as you may recall, the big issue was that I needed them to fill out a reasonable page count for a full-length poetry manuscript. Some of you would say, and I do hold it against you, well, just write a bunch of new poems. Let’s not be hasty. Who can write new poems in 90 degree weather?

I started wondering if I couldn’t nudge some of them in a different direction. Alert readers will say, hey, wait a minute, didn’t you have a post not that long ago claiming that one needs to stay true to the poem’s originating impulse, stop manhandling it to be something other than what it became? Fortunately, I have no alert readers, so I can ignore that.

If poems can be said to have a turning point — and apparently they can be said to have such a thing. Much has been written on it, so I won’t go into it here. Actually that’s because I haven’t read most of what’s been written on the “turn” in poems, mostly because I’ve read almost none of it. I only just learned that a “turn” in a poem is a thing. I mean, yeah, the sonnet “volta,” but apparently all? most? many? poems have a turn/turns in them. I’d have to think about that harder, but it made me consider the poem as a path or, if you’ll pardon the expression, “a journey.”

As  such, there may be certain points along the path in which another road might be taken. So I’ve come to look at each of these poems in this way, trying to catch just what moment, what line, what word might offer an opportunity for the poem to turn, to vee away or veer somewhat from where it had been going. What will happen?

This is actually kind of a fun exercise for 90 degree heat. Way more fun than trying to conjure up brand new poems. That’s for autumn.

Speaking of autumn, here is a link to a videopoem of mine on Atticus Review that I shot while in residency at MASSMoCA last fall. https://atticusreview.org/narrow-the-vessels/

And have I mentioned I have a new chapbook out? Oh, I have? And I’ve given you the link?  www.graysonbooks.being-many-seeds? Oh. Sorry. 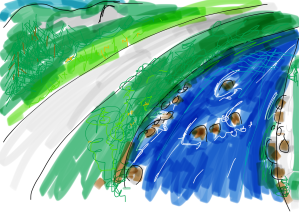 2 thoughts on “And lead you through the streets of London; or, On Poetry Revision as a Journey”