I was looking for some uplift in these trying days, and reading around I stumbled on some Phyllis Wheatley. In her poem “On Imagination,” she wrote this:

Imagination! who can sing thy force?
Or who describe the swiftness of thy course?
Soaring through air to find the bright abode,
Th’empyreal palace of the thundr’ing God,
We on thy pinions can surpass the wind,
and leave the rolling universe behind:
From star to star the mental optics rove,
Measure the skies, and range the realms above.
There in one view we grasp the mighty whole,
Or with new worlds amaze th’unbounded soul.

And I thought about how art can “grasp the mighty whole.” And I also got thinking about artists whose work feels joyful to me. I thought about Alexander Calder’s work, those fine lines drawing arcs in space, and that giant piece in Seattle throwing a red arc against the gray clouds and the bay. I also was reminiscing about seeing Calder’s circus, so magical and entrancing, the twined animals, the skinny tightrope walker on the skinny tightrope. But I also found myself thinking about the poems of E. E. Cummings, which seemed a natural leap to make.

They are linked somehow in my mind,  Cummings’s wiry poems, Calder’s poetic wires. Something about wit, about play. Something about space. They ate space and laughed it out, these two originals.

They may have met — both loved France, both gained initial fame in the ’20s, both were from the northeast. Cummings’s family were friendly with Williams James; Calder married James’s grandneice. Calder illustrated a Cummings Christmas poem.

They both seem to have done work that was utterly different, fantastically unique. I’m sure people who know more about these things than I could trace lines of influence, maybe even show me how they stole ideas or mimicked someone else. But that doesn’t take away how fresh their work still feels, how serious minded they were, but how powerful the creative play behind it comes through.

Empty space was the milieu in which they created. The wind blows through their works.

Ah, apparently this is not an original thought — I did some more research and found this quote from art critic Jed Perl commenting on Calder’s work: “…a new type of sculpture, dematerialized and beyond tradition, the plastic counterpart of e.e.cummings’s poetry….”

I don’t know that any visual artist and poet are so connected in my mind, except of course if a poet has written memorably in response to an artwork; Auden on Breughel, for example. But I don’t think of Auden’s work as Breughelian. Chaucer, maybe. Yeats? What visual artist would I like my work to echo? Will the answer give me a pathway toward new work? How can I attempt to grasp the mighty whole? 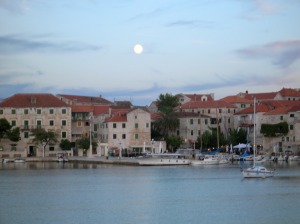 2 thoughts on “Drunk on the Moon; or, How Phyllis Wheatley Got Me Thinking about Calder and Cummings”