I saw a piece on TV that featured a guy who puts up videos of himself doing splits in strange places in the world. He has millions of followers. So many that companies pay him millions of dollars to do his goofy acts with their product in his hands. (Does the equation really work: I see a guy do goofy stuff + I see the guy do goofy stuff holding a particular brand of mop = I buy the mop? Companies believe so, in great numbers, to enormous sums of investment.)

What amuses?/bemuses?/disturbs? me is that millions of people watch this guy and others who do similar stupid stuff. How did the first person find this guy? Why did so many others watch, and continue to watch? It does not seem a good use of time. It does not seem worthwhile.

But I myself certainly waste a lot of time, things that are not worth the while. Perhaps on stuff the guy-doing-silly-stuff-watchers would find ridiculous. Perhaps they would find my blog posts a waste of time, both the writing them and the reading of them. And look at you! Taking the time to read it when you could be doing any number of other important or flagrantly unimportant things.

Hannah Arendt wrote, “Nothing and nobody exists in this world whose very being does not suppose a spectator. In other words, nothing that is, insofar as it appears, exists in the singular; everything that is is meant to be perceived by somebody…”

The Splitting Man needs me; I need him. I could not exist but for another, an other, wending his or her silly way through an encounter in the world that may include me. But if Splitting Man does not see me, but I have seen him, do I exist? If I’ve only seen him on TV, does he exist? What does he have to say to me? If he could speak to me, create me in the listening, what would he say? And would I buy it? 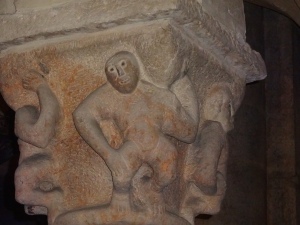