Another thing occurs to me about this issue of the self as narrator, which I addressed in my last post. I think about someone like John McPhee, who writes from an almost transparent stance. You basically see what he sees, with only the faintest shadow of McPhee himself. Other narrators take a stance that is more like they are standing beside you, a companion murmuring in your ear. Another approach is the narrator who seems to be experiencing something and calling to you over his or her shoulder about it. The problematic narrative stance is one in which the narrator stands between the thing narrated and the reader. This is when a narrative self who is less than sympathetic can really do damage to the material. Be obnoxious, fine, but get out of my way. So perhaps the trick with writing from the narrative self is picking the right stance with regard to the reader. Be my friend, be my guide, be my ghost, but don’t be the tall wide guy sitting in front of me at the movies. 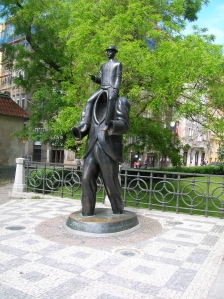 2 thoughts on “Me Again; or, More on the Self as Narrator”